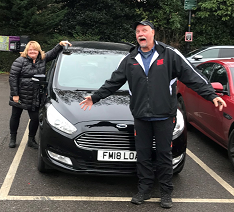 Coaching on an English Country Road

In November, Sandy and I obtained silver. Silver in the anniversary sense. 25 years. She says we are on our way to gold, but I’ll have to live that long.

We wanted to do something special and out of the ordinary. Sandy found a Groupon for a trip to England. It was a very good deal. The Groupon covered a couple nights in London then gave us access to a variety of B&B’s and a rental car. We planned an ambitious 5-day, 4-night loop from London out west then up north beyond Manchester, back east then southwest to London for the flight home. But driving in England was the one thing Sandy and I had some anxiety about. We had our two youngest (Matthew, 16 and Mary, 13) with us. And we didn’t know how we’d respond to driving on the other side.

After two amazing days in London, we loaded everything in the car. We decided that Sandy would be the best choice to drive. I would navigate. Thank God for the Waze app. After calming our initial nerves we both settled in well. We navigated to Windsor Castle and spent a couple hours on the grounds. After a late lunch, we got back in the car and set out for our first night in a countryside B&B.

England in November has short days. We did not realize how short they are. On this day, the day after Thanksgiving in the states, the sun rose at 7:32 am and set at 4:02 pm. That’s 8½ hours of daylight. That’s not a lot. We left Windsor about 3:30 and in a short time found ourselves off the main highway on a very narrow country road. In the dark. In the fog.

Our journey soon became harrowing. The English roundabouts were disorienting for us. And there were a lot of them – no stop signs. English drivers are used to their roads. Speed limits are high, 50 mph on roads I would consider 35 mph to be top end. And now we are traveling in rush hour traffic. Pitch black, cars flying by, curves in the road, cars on our ass, two children in the back. With both hands death gripped on the wheel, Sandy muttered repeatedly,

Since my role was to keep her calm, I kept calm.

“You got this honey. You’re doing really well. Go at the speed you’re comfortable. Don’t worry about the cars behind us.”

At one point, Sandy saw a place to pull over and whipped into it, braked hard and stopped suddenly. The kids woke up in the back (their way of coping was to sleep).

“Take all the time you need. We are in no hurry.”

“No, we don’t. We can wait until all this traffic dies down, if we want to.”

After a minute or two, she pulled back on the road. The miles counted down. When we got below 10 miles to the B&B, we felt encouraged. Yes, maybe we could do this.

We turned off the road and headed to the B&B. We pulled in just a couple minutes after our 6:00 pm deadline. Marilyn greeted us warmly in her little parking lot way out in the country and ushered us upstairs to our rooms – Sandy and I in one, Matthew and Mary in another. Then she disappeared. We had no wifi, a tiny little TV and no place to go. We certainly weren’t venturing out to find food.

Sandy and I were rattled. We discussed options. Tomorrow we were headed to Manchester, a 3-hour drive. We had tickets to a 3:00 pm Manchester United game. Afterwards we were scheduled to be in another B&B more than an hour north of Manchester. It would be very dark. There would be massive traffic. My anxiety rose thinking about it.

I fell asleep early. I woke up very early, 2:00 am English time. I could not go back to sleep. By the time Sandy woke and spoke to me, I could not talk (seriously) and my hands were shaking. I had a revelation in those sleepless hours, that there were instances that if I had been driving; my instinctual reaction would have been to veer suddenly. But I wouldn’t have avoided those cars; I would have steered directly into them. I would have crashed and maybe killed us all. That’s why I couldn’t speak.

Sandy ushered me downstairs for an English B&B breakfast. We said our good-byes and headed north. Travel was significantly better in the light of day. During our conversation, we formulated a plan. We thought about getting a hotel room in Manchester. It would be more expensive and we’d lose out on our B&B reservation dollars, but it had the potential to ease our emotional stress. Problem was that when we checked online there were absolutely no rooms available. After all, Manchester United was playing a home game. Sandy was undaunted.

We pulled over and called the Hilton reservation line. Sure enough, just like Sandy had said, the Doubletree smack dab in the middle of Manchester had 2 rooms. We booked for 2 nights. We looked at each other. We smiled. Problem solved. Stress relieved.

The rest of the trip went beautifully. Sandy and I took our picture at Stonehenge on our 25th wedding anniversary. The road from Stonehenge to Heathrow was the last leg. The roads were better. However, getting to the Hilton Garden Inn had two tricky roundabouts back to back. Again, we were piloting in the dark. We could see our final destination. With the traffic, it was confusing. Sandy lost it. She panicked. She braked hard and stopped in the middle of a roundabout.

“That way.” I replied calmly and pointed. She continued and within a few seconds we pulled into the hotel car park.

“No. But you/we finished. Successfully.” We both laughed.

Yet, one last small hurdle existed. We had to return the car. Hertz was more than 3 miles away. Sandy insisted on doing it herself. I was so proud of her. She didn’t want it to end on that last note. We unloaded our bags, went to our rooms and waited for her return. I heard the key in the door, looked up and she wore a tremendous smile. Redemption.

They are many analogies to recovery coaching in this story, and I’m confident you’ve discovered several on your own. Here are some lessons for me.

1.   Stay calm even in the most tense of situations.
2.   You may end up in some difficult (if not dangerous) situations.
3.   Sometimes recovery coaches will experience strong emotional responses.
4.   Plans can be altered.
5.   There comes a time (hopefully) when the recoveree desires to accomplish a goal without you.

In 2015, I finished a thruhike of the entire Appalachian Trail, a trek of 2,189.2 miles. It took 189 days and 6 pairs of boots. During all that time alone with my Creator, my purpose in life became more precisely defined. I am, simply, to coach recovery. Recovery saved me from an early demise and brought purpose to my tattered life. I have learned that I’m a coach to my very core. I am blessed to put the two together. I started work at the Connecticut Community for Addiction Recovery (CCAR) in 1999. I became the Executive Director of this recovery community organization in 2004. I have trained the CCAR Recovery Coach Academy© dozens of times and have a hand in modifying, improving and adapting various recovery coach curricula. I’m old enough now to start considering my legacy. This is a way for me to share things I have learned in my recovery, in my role as Executive Director and a trainer. I find that when I speak I present the same messages over and over. It’s time to write them down.

In 2015, I finished a thruhike of the entire Appalachian Trail, a trek of 2,189.2 miles. It took 189 days and 6 pairs of boots. During that sacred time, my purpose in life became more precisely defined. I am, simply, to coach recovery. Recovery saved me from an early demise and brought purpose to my tattered life. I have learned that I’m a coach to my very core. I am blessed to put the two together. I started work at the Connecticut Community for Addiction Recovery (CCAR) in January 1999. I became the Executive Director of this recovery community organization in 2004. I have trained the CCAR Recovery Coach Academy© dozens of times and have a hand in modifying, improving and adapting various recovery coach curricula. I’m old enough now to start considering my legacy. This is one way for me to share lessons learned in my recovery, in my role as Executive Director and a trainer. When I engage with others, I present the same messages repeatedly. It’s time to write them down.